Fat Shaming: Does it Work? – BodyRock Skip to content
Cart
Now reading: Fat Shaming: Does it Work?
Share
PrevNext
(Disclaimer: This article does not refer to people who are overweight or obese as a result of legitimate medical reasons. I'm aiming this at people like me - those who are overweight due to poor diet, exercise, and lifestyle choices. You know who you are!) I love the way the Urban Dictionary defines the term "Fat Shaming":

A term made by obese people to avoid the responsibility to actually take proper care of their body and instead victimize themself by pretending they're discriminated like an ethnic group. When confronted with someone like that they will ignore all the facts about obesity being unhealthy and pretend it's some sort of evil socially constructed conspiracy by the patriarchy. Example: Peter: "You've started gaining weight at a worrying level, maybe we could exercise together and take up a sport since you're always at home" Bianca: "omg stop disciminating me you're just fat shaming, all my fat is genetics and exercising is just a social construct made by our sexist society, i'm not being brainwashed into ur chauvinistic world" *Bianca then proceeds to eat burgers and refuses to better herself*

A lot of people have made a really big deal about the concept of "fat shaming" - saying that it's morally wrong. Well, I'd have to agree that anything that humiliates someone is wrong. The word "shame" is described as "a painful feeling of humiliation or distress caused by the consciousness of wrong or foolish behavior." Notice the word "pain". Imagine how the girl in this picture must feel:

If fat shaming really does cause emotional pain or stress, it probably is the wrong thing. Now, on the flip side, I'd have to say that fat shaming is one of the best things in the world. Think about it: What makes you want to work to get in shape? Is it the desire to look good? Is it the desire to avoid health problems? Do you want to feel better about yourself? Do you want to feel healthy and in shape? No matter what your reason to get in shape, you're trying to AVOID something else. You're trying to AVOID sickness, body issues, embarrassment at the way you look, weakness, and more. You want to avoid the SHAME of having those problems, so you diet and work out to get in shape.

What many people see as "Fat Shaming" is really just "telling them s*** they don't want to hear". If you really are overweight and unhealthy, how else are you going to know to change your situation than by hearing about it? If you get so sensitive and take it as "fat shaming", you're missing out on a chance to better yourself. For example, look at the Maria Kang debacle. I'm not talking about the one where she posted against plus-sized women in lingerie - I'm talking about the picture with her kids. [caption id="" align="aligncenter" width="768"] 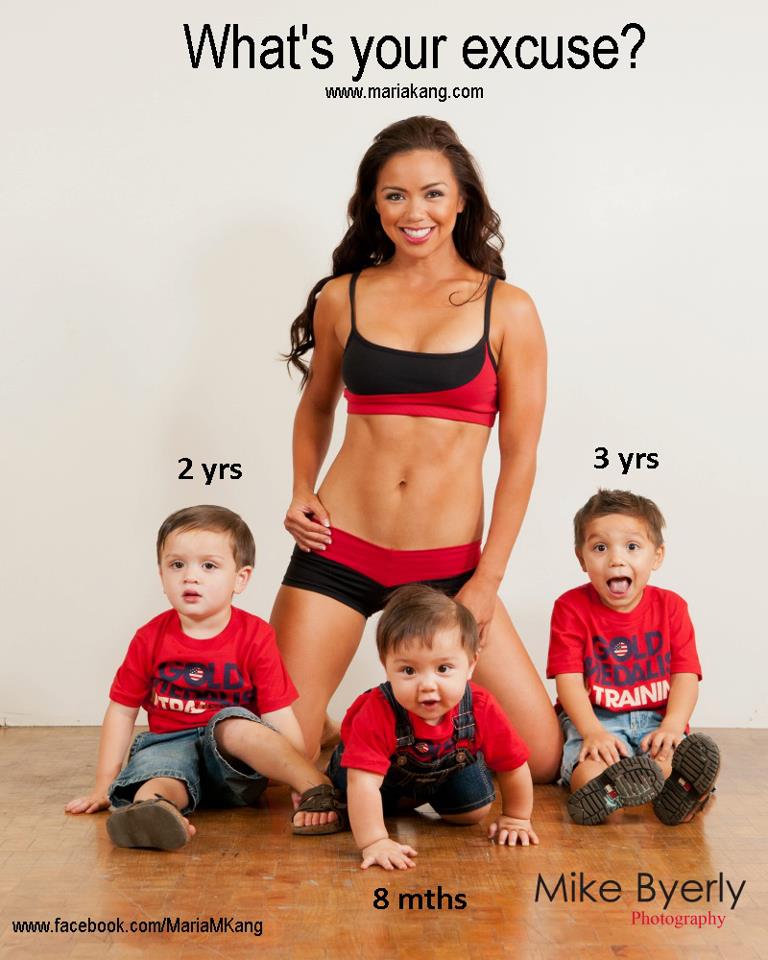 Source: mariakang.com[/caption] The picture showed that mothers really could be healthy, and said, "What's your excuse?" Harsh and a bit self-righteous? Perhaps. Shaming? Quit being so sensitive! If you really want to see "fat shaming", go to a high school and hear bullies pick on the overweight kid. That's fat shaming, not some fitness trainer or model saying, "I'm proud of my body." Every time Lisa Marie or Melissa posts a workout on The Daily HIIT, the first thought that goes through my mind is, "Damn, I wish I was in good enough shape to do that workout." I know where my fitness level is at, and I know it's not there. Does that mean they're shaming me because I can't keep up? Of course not!

Stop being so d*** sensitive and taking things so personally. If you feel guilty about your fitness level, your body shape, or the way you look, do something about it. Unless you have a genuine medical condition stopping you from getting in shape, you have as much of an excuse as I do: none! I'm by no means in shape. In fact, I'm working to get rid of my belly fat, arm fat, leg fat, and body fat just like so many other are. I'm willing to bet that easily 50% of the readers on DailyHIIT are in better shape than I am! But, does that mean all of the posts showing people's progress is "fat shaming"? Don't be silly and take things personally that really aren't. Your guilt is on you - don't place blame on anyone else for the choices that have led you to where you are. I know what I did to get the body I have today, and I know that not all of it is my fault. But, I also know what I need to do to get the body I want, so I'm going to shut up and work for it. There's no shame in being fat if you're working to do something about it. The only shame is when you accept the problem and do nothing to change it. BTW, "fat shaming" does work, but only for those who actually take it the right way. All of you who feel "shamed" when you see pictures and posts by skinny or fit people, use that shame to push yourself to get the results these people did. It's what's driving me to lose weight and get in shape, and it can be turned into a positive force for good.