Food Villains #29: Instant Popcorn – BodyRock Skip to content
Cart
Now reading: Food Villains #29: Instant Popcorn
Share
PrevNext
Microwave popcorn may make movie night much easier and quicker, but it definitely makes it far less healthy! First off, trans fats, everyone's least favorite lipid. A bag of microwave kettle corn has roughly 15 grams of trans fat--far more than you should be eating in an entire day! The serving size also contains: In a full bag of popcorn, you get a lot more c**p than you should! [caption id="" align="aligncenter" width="500"] 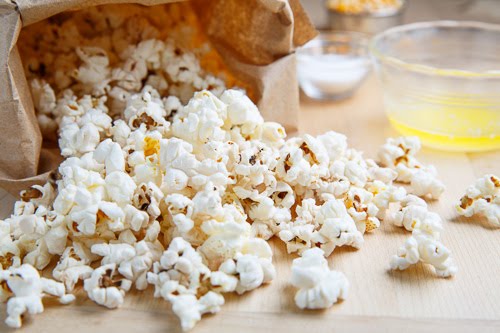 Source: www.closetcooking.com[/caption] Want to make things even worse? According to the FDA, the chemicals coating the interior lining of your popcorn bag break down when they are microwaved. They turn into something called petrofluorooctanic, a carcinogen that is likely to cause cancer. Plus, there's the diacetyl in the "butter" flavoring, which can cause lung problems. Get this: there's a disease called "popcorn workers' lung"--a lung condition that workers in popcorn factories suffer from. Can you say "UNHEALTHY"? My choice: Air popped popcorn. (Lower in calories than popcorn made in a pot, and just as tasty!)

Negative much? 6 Phrases To Eliminate From Your Evil Self Talk