Lower Back Pain and Tight Hamstrings – BodyRock Skip to content
Cart
Now reading: Lower Back Pain and Tight Hamstrings
Share
PrevNext
When I was competing in Nova Scotia at Dalhousie I suffered from back pain as many
people do whether they are an athlete or not. However at that time my L5 sat posterior on my
S1, so I went to physio and did a lot of core work. My problem was easily fixed. This isn’t always
the case for everyone though. I was lucky.
Some of you may not know but your back can be directly effected by the hamstrings! Yep I said
it; your hamstrings...those muscles in the back of your legs. Below is a picture of the back of
your legs. Your hamstrings are made up of the biceps femoris, semitendinosus, and the
semimembranosus. 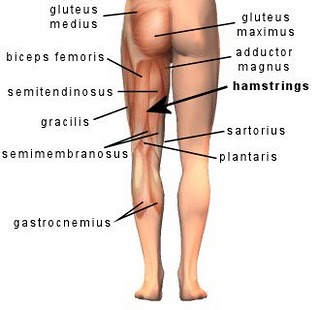 When your hamstrings are tight they can limit your mobility and cause back pain as well. The
reason is that tight hamstrings will tilt the pelvis backwards which flattens the lumbar curvature
also known as the lordotic curve of the lower back. When your core is weak this pain can be
even stronger.

Trainers use tests to determine injuries or problematic areas. One such test is the leg raise test
(lie supine, limbs horizontal, one heel is to be lifted and the hip joint with the knee extended.)
Sometimes there is pain when this performed and it is commonly confused with sciatic pain.
When I was in Ottawa competing for the  Ottawa Lions I think that I was misdiagnosed with the
sciatic vs hamstrings because I have had really tight hamstrings in the past and now that I
stretch more I have less pain when running. Another example that stretching has massive
benefits, and should never be forgotten. Also, make sure to work on the core muscles to have a
good posture to help prevent pain.
Also LADIES this lordotic curve that can be effected by tight hamstrings effects your booty! So if
your desiring a nice firm butt don't just do squats and lunges till the cows come home work on
your hamstring flexibility so you see that lordotic curvature in your back because it will help
accentuate your rear end!