“The thing is that women will wear seat belts that don’t work [with the pants], or they’ll wear a purse that doesn’t work, or quite frankly some women’s bodies just actually don’t work for it.”

“So, more likely that they’ll be see-through on some women than others?” Bloomberg’s Trish Regan asked. 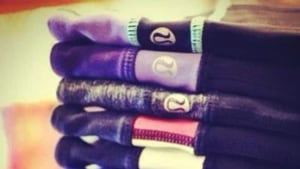 “It’s really about the rubbing through the thighs, how much pressure is there over a period of time and how much they use it,” Wilson responded. “So not every woman can wear Lululemon yoga pants?” Regan asked. “I think they can,” Wilson said. “It depends on how you use it.” Wilson responded. This past spring, Lululemon was forced to pull 17% of its yoga pants from stores over an unacceptable 'level of sheerness'. At the time, the company said part of the problem lay in customers not trying the pants on and buying sizes too small for their bodies.

The scandal damaged its reputation and reportedly cost the company over $20million, and in June CEO Christine Day announced that she would be stepping down after five-and-a-half years.
Yeah, and we think that cost is well deserved. The fact that they blame the failures and inconsistencies of their products on their customers is RIDICULOUS. Sure, if you're scooting your a** across concrete, you may see a bit more wear-and-tear on the pants. But the fact that they're basically transparent should NEVER happen. They are designed to stretch. They are yoga pants. That's like 99% of their purpose! The fact that if they stretch "too much" that you can see straight through them just seems like poor manufacturing.
And what does "seat belts that don't work with the pants" even mean?! Do you follow us on Instagram?

Dear Lululemon: I Am a Plus-Size Woman Who Has Never Ripped a Pair of Pants