Are You A Millennial? Single? You May Not Be The Only One – BodyRock Skip to content
Cart
Now reading: Are You A Millennial? Single? You May Not Be The Only One
Share
PrevNext
Wedding season is here again! This time of year has that unfortunate side effect of making you feel like you are the ONLY one not getting married. But don't fret too much, a new set of stats has shown that millennials are taking their time walking down the aisle. Gallup released data this week that shows that the percentage of married people between the ages of 18-29 is on the decline. 2014, the most recent year available, only 16% were married and 14% were living with a partner. 64% were single and had never been married. The report concludes, "This means that not only are fewer young adults married, but also that fewer are in committed relationships." The number of single people in that age bracket has been rising since 2005. In 2005 the number of single people was 49% and 32% were married. The Bureau of Labor Statistics shows that over half of the United States is currently unwed. That's a lot of people! So, chin up. You may be single but you aren't alone. 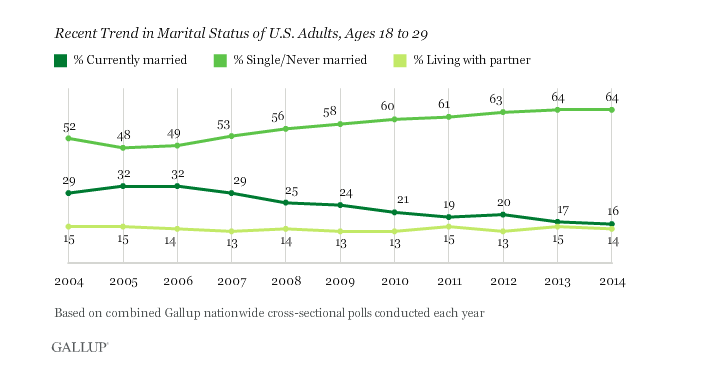 From Back to Front Workout