This exercise app aims to make working out a lot cooler. Imagine being able to walk the Swiss Alps, cycle the country roads of France, or run the California coast? With Bit Gym, you may be able to - all without leaving your house. [caption id="" align="aligncenter" width="491"]

Source: health2con.com[/caption] You download the app to your smart phone or tablet, and the app streams live tours that you can hike, walk, run, or cycle. You can work out with others connected to the same trail, making it an interactive workout that opens up your horizons to new, awesome places!

No, this drone doesn't give you heart attacks - it saves the lives of those having one! [caption id="" align="aligncenter" width="640"] 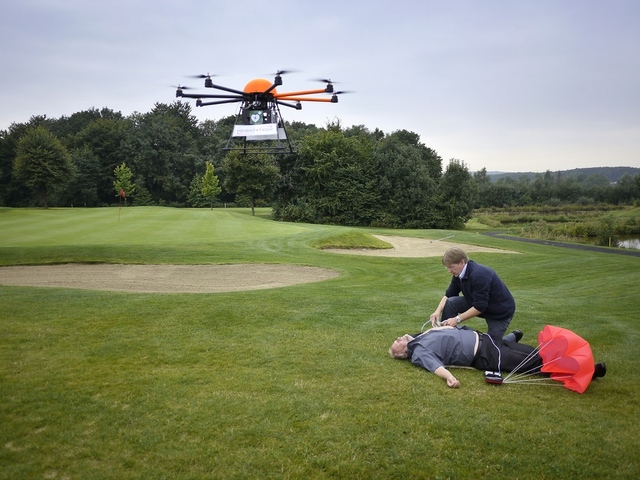 Source: theverge.com[/caption] The Defikopter - drone created by Height Tech (a drone development company) and Definetz (a German not-for-profit) - is designed to bring defibrillators to emergency responders and victims of heart attacks. The little drone can travel at 43 MPH, and can fly in a 6-mile radius. It's simply controlled by an app downloadable to a smart phone, which sends the request for a defibrillator. The request is tracked via GPS, and the drone can get the supplies to the victim quickly even in traffic-congested cities.

Before 2012, there were very few devices that could sync with products like Nike+. However, thanks to the latest updates in the fitness devices, they can sync with nearly any Bluetooth-enabled smartphones, tablets, computers, and TVs.

Think a pedometer mixed with a smart phone, and you've got the Striiv. It's a simple little device that can be carried in your pocket as you run, but it comes with a display that will allow you to track your progress as you run, walk, or cycle. You can use the games on the device to make your workouts fun, and you'll be able to walk, run, or cycle to raise funds to combat polio, deforestation in the Amazon, and providing clean water in South America.

Best of all: it's made to be durable, and it takes a lot to damage this little device permanently.

Tired of getting sunburned? Worried about skin cancer? Get this wristband - currently in development at Scotland's University of Strathclyde. It's a simple paper wristband, but the paper contains a special agent that is released when UV light is absorbed into the band. When too much UV light is absorbed, the band will change colors from a "Livestrong" yellow to a bright pink.

The bands aren't one-size-fits all, but they're made to adapt to the unique tolerance levels of each person's skin. Those with fair skin will get a band that changes colors more quickly, while those with darker skin will get one that takes longer to change colors.   I can't wait for the day that Light Sabers are invented! We'll all be doing the Jedi Workout then…