Too Smart To Fall For It – BodyRock Skip to content
Cart
Now reading: Too Smart To Fall For It
Share
PrevNext
I recently discovered the Vagenda when I came across their hilarious headlines without sexism campaign on twitter, so excuse me while I nerd out about a publication devoted to funny feminism. I’ve been reading their articles pretty much non-stop since then, and this one about being “fed up of being told I’m too smart to fall for body fascism” (full article below) struck a big chord with me. The author is one brainy lady, and a recovered anorexic, drawing from her personal experiences to explain just why that phrase is so wrong. Intelligent people can’t be vain or insecure? We’re too smart to buy into the GAJILLION images of unrealistic beauty standards that are being shoved down our throats by the media? If only I was smarter, I wouldn’t feel bad about my appearance. Got it. Right. Thanks.

Knowing is not the same as feeling. Being told that you’re “too smart to fall for body image crap” is an attempt at appealing to one’s logical side. Here’s the thing: logical people have feelings too, and as much as one can KNOW that their appearance is fine the way it is, it is an entirely different thing to FEEL confident in your appearance. I like to think I’m an intelligent person, but I am no less affected by the pervasive images of unrealistic beauty standards than anyone else, regardless of my IQ. 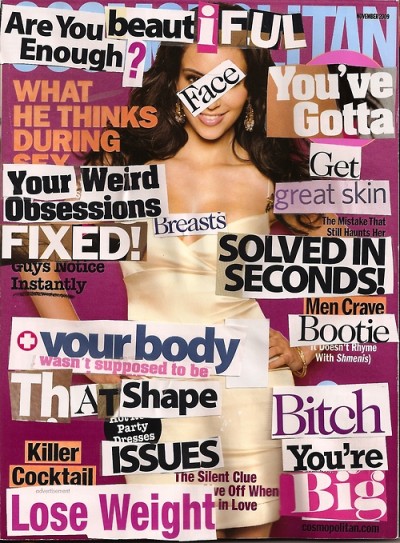 “You’re a smart girl, surely you don’t fall for that thin crap.”

I am a smart girl, or rather, an intelligent person. I read things. I think about things. I write things, and sometimes they make sense. I use long words even when I’m drunk (or perhaps especially when I’m drunk). Like the time I slipped the word ‘smarting’ into conversation at a party and not one person knew what it meant, or my recent attempts to bring back the word ‘chaste’, which everyone promptly misinterpreted as “chased”. I am, by most people’s standards, quite intelligent. I’m also a recovered anorexic. I worry about cellulite, hate it when people touch my stomach and have recently looked up where one can procure Spanx in New Zealand. And I am sick of hearing that only stupid, shallow people buy into the unrealistic expectations society has of women. Because as much as I try to fight it, I often buy into them. Does that make me shallow and stupid? Is it therefore MY FAULT that I feel inadequate sometimes – because if I was more intelligent and not so vain, these expectations wouldn’t affect me, would they? Saying “You’re a smart girl, surely you don’t fall for that thin crap.” is well intended – people are trying to appeal to my logic, my intellect. They’re saying, you know there is more to life than a thigh gap. You know that your value as a person is not dependent on the size of your jeans, that happiness is not dictated by a scale. You had the reading age of a 12 year old when you were 6, surely a picture of a skinny girl has nothing on you! 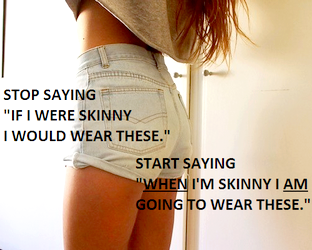 Okay, sure. I know these things on an intellectual level. But the images that tell us on a daily basis that we are not good enough – not thin enough, not tall enough, not smooth enough, not insert-adjective-here enough – they speak to something far stronger and far deeper than our intellect. Images are our first language. Before we processed the world in words, we took it in in pictures. Images transcend words, they transcend logic. They hit us where it fucking hurts, without us even being aware of it. So is it any wonder that even the most intelligent, least vain women are affected by the thousands of pictures of ‘perfection’ we see every day? And more than that, is it their fault? Saying that worrying about the way we look is vain and stupid creates a mentality of blaming the victim. If I was smarter and less self-centred, I wouldn’t feel bad about myself? Yes, I can see now that I’m the source of this problem. Thanks for pointing that out. As well as that, it raises the bar even further. Calling the impossible standards women are subjected to stupid or shallow doesn’t make them go away. Now, instead of just expecting women to look a certain way, we expect them to look that way naturally and with no obvious effort. So yes, you’re still expected to be a size 2, but if you admit to wanting that, if you admit to dieting, if you admit to not liking your body, suddenly as well as not being thin enough, toned enough, good enough, you’re self-centred and dumb. How many times have you read an interview where a celebrity is asked what her diet is, or what her exercise regime looks like, or some other boring bullshit question about the way she looks (My favourite question to avoid falling into the trap of asking people the same cliché crap? How they would choose to die if they couldn’t die of natural causes. My personal answer is suffocating from laughing too hard. I happen to think Jennifer Lawrence would have a great answer to this one), only to have her say “What, the gym? I hate the gym. Sometimes I go for walks.” or “I eat whatever I want.” Guess what, I GO FOR WALKS TOO. Sometimes I even go to the gym, and I look nothing like you! The fact that many women are now covering up the lengths to which they go to look ‘good enough’ really shows how twisted the standards have become. So to the people who say, “You’re a smart girl, surely you don’t fall for that thin crap.” – I need your help to change these expectations, not your comments that insult my intelligence as well as my body.

Alessandra Ambrosio in Self Magazine