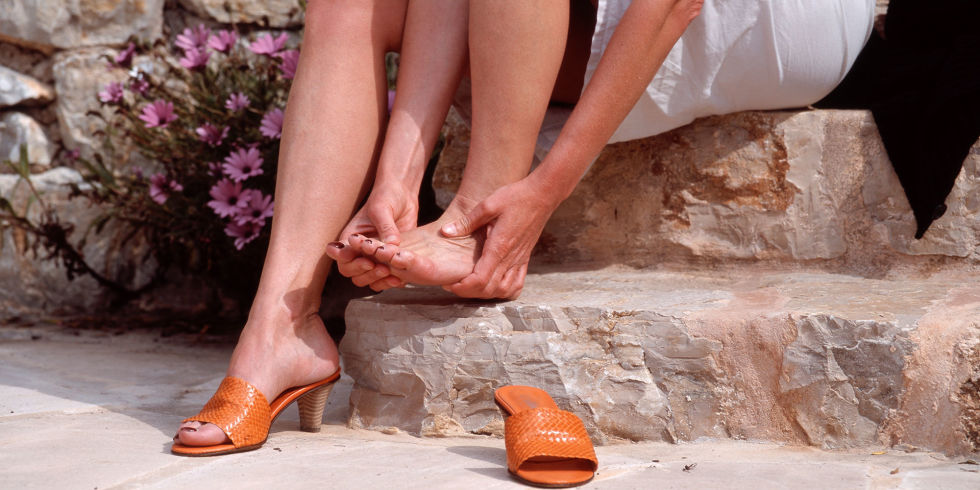 They say beauty is pain, which might give reason to why we slip our feet into tiny spaces with an unnatural elevation and walk around for hours to appear taller, leaner and, of course, fashionable. But one woman is sick of caring about these ideals, as comfort trumps all, right?

"My feet are the one part of my body that I would gladly replace. They're my mother's feet, wide and flat, a solid base for many hours of manual labor but not really good for anything else. There's no real arch, a lesson I learned the hard way in dance class in high school. Finding shoes has never been an easy task," begins Megan Reynolds. A pair of knockoff Doc Martens she was given by her mother in sixth grade hurt her feet, and character shoes in high school pinched her toes. [bctt tweet="Why One Woman Told Her Heels to Take a Hike"] Now in her thirties, Megan has found that her style has continued to become more and more casual. She says she would rather be comfortable in her own skin than squeeze into a pair of jeans when sweatpants work just fine.

"If asked to attend a semi-formal event tomorrow, I'd have to really scramble to find a dress and a pair of shoes, unless I could get away with my white Birkenstocks (if I cleaned them nicely). At this point, I'm creating a wardrobe that doesn't front. High heels are nothing more than sartorial posturing, intended to empower women but serving really to cripple them at the basest of levels. You need your feet to run, you know. You can't run for the train or walk at an appropriate pace in heels," Megan says.

She was never into heels. Her first pair came from a thrift store in Ashland, Oregon. She says they were "a peep-toe sandal in black patent leather and faux suede, with a heel like a tent stake and a solid platform." She wore these for every high school formal, never quite mastering how to walk in them well.

And while heels have never been her thing, Megan knows they are circumstantially necessary, like for job interviews in skirt suits. And when in this situation, she sported a pair of Aerosoles, which her mother had bought for her. She later lost them at a wedding, and never bothered to replace them.

"Barefoot, I stand at a solidly average 5'6" and stocky, with short legs and powerful calves. My body isn't built for spindly, beautiful heels, though I recognize their power. Sometimes, when I'm killing time on a Saturday, I'll go to Nordstrom Rack and gather pairs of shoes in my arms and drag them to a corner like an animal bringing back its prey. Sometimes a pair almost fits."

But, every time she dares try a pair on, Megan says she feels sharp pains in her feet when she puts heels on, along with a pinch of her pinky toe. She tries to convince herself that there is an outfit perfect for the pair she has on. But she just can't go through with it.

"It feels a little bit like giving up, sacrificing my beauty and my youth to Eileen Fisher and sensible sack dresses, but it works for me. My introductory glimpse at the wide world of comfortable footwear were courtesy of Worishofer sandals, the gateway drug to the wonder of orthopedic footwear. My first pair was bronze snakeskin and they made me look like a glamorous retiree," she said. She wore that pair out. And then, she turned to Birkenstocks, claiming her foot could finally breathe. And this year she found herself in a pair of Dansko clogs. She notes that they are a bit ugly, but they're "wide and clunky and achingly sensible, a shoe for a Midwestern mommy blogger who needs something practical but still slightly fashionable."

She has been breaking them down for a month and a half, repeatedly taking them to the store to be stretched. "The third and final time I took them to be stretched, the woman working there was incredulous. But, when I picked them up the next day and slid my feet in with relative ease, she told me her secret: 'We used the stretcher for men's shoes,' she said. 'It's wider.'"

Megan's rejection of shoes that hurt feels a bit like giving up on her femininity, and asking to become invisible to others. But can it really be so shallow?

"After I stopped trying to wear shoes that didn't feel like me, I realized that it's ridiculous to define myself so strictly by what I wear. Comfort is highly underrated. There are so many other things I deal with in life that are painful -- student loans, the subway, occasionally my sisters -- that it seems pointless to inflict endless pain on myself when the shoes I put on my feet are the one thing that I can control."

Have you given up on wearing uncomfortable shoes like heels?

10 Mistakes You Are Probably Making At The Gym